These BMG's were mounted in manually operated rotating turrets to the left and right sides of the Elco 80' PT's (and other PT's and MTB's) and are reputedly the first weapons used by the USA in WWII to shoot down Japanese aircraft in the attack on Pearl Harbor.

The available specs and photos's for this weapon do not seem to match, many specs that I have read show the shell as being 99mm long whereas it seems that they were 138mm long which is more consistent with comparisons of PT-Boat photo's which can unfortunately only be scaled quite roughly. I have researched this weapon more than any other piece on the boat and while I have a large number of photo's and spec's they mostly just confuse the matter, certainly the late model Browning 50 Cal barrel's are quite different than their WWII counterparts and I suspect that the generally available spec's reflect the later gun. There were a lot of different manufacturers as well and their detail seems to vary quite a bit.

My thanks to Ben Hartley from New Hampshire USA for the shell specs that are in line with my findings - it seems the shell casing is 99mm or 3.91" and the shell and projectile together equals 138mm or 5.45".

My thanks also to Patrick Mathews for photo's and lot's of detail.

Contacting Browning themselves seems to be of no help whatsoever, unless you want a shot gun or a fishing rod!  Thanks to Ramo as well for not providing a thing. Thanks guy's, we only want to make models!  and there seems to be far less information available on this weapon than any others used in WWII - maybe it's still a secret weapon!

The latest model parts (Feb 2005) have been micro machined out of acrylic using the new laser cutter. 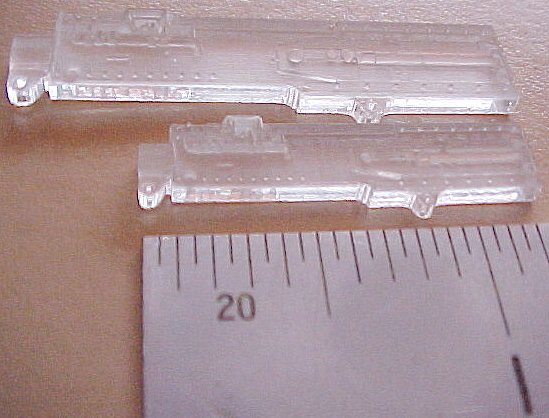 Shown here are two different scales 1/20 and 1/14.6, these have been progressively raster cut using 10 passes of 10 different detail mask patterns to produce a composite depth cut of about 1.2mm, seems fairly consistent at least with that particular piece of acrylic. 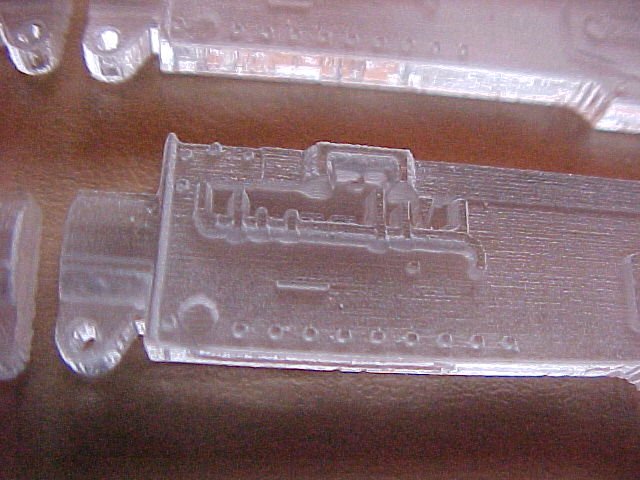 Here you can see the fine detail including the raised rivets and deep holes. A heck of a lot of work to produce the patterns but I am very pleased with the result and I can now make guns in any scale. 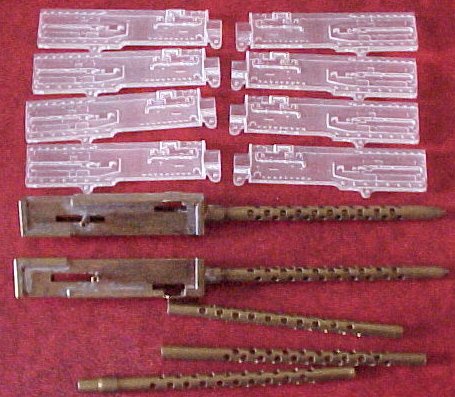 Here is a set of 4 gun bodies at 1/14.6 scale compared to the original brass guns I made which were too big for my 1/20 scale. The barrels are probably still best made out of brass tubing but I will attempt some castings at 1/20 scale as well.

This photo is of an actual shell has helped to scale the drawings above and below. Thanks to Bob DeVries

I drew the disintegrating link from the string of shells shown below and made one up out of soft 1mm Aluminium to see if the drawing was right. The originals are made of 1mm (40 thou) Zinc Plated Steel. (hmm - how to make a 1/20th scale version, it's not very big!)

Ramo Defense systems http://www.ramo.com  had a website on line which has been removed but the had a model M2AC - M-2 Aircraft .50 Cal gun shown on their website which looks very very similar to the late war PT guns and I have redrawn this as well as I can below. I asked Ramo about drawings for modelling purposes but according to them they seemingly make parts for these guns with no drawings - yeah right! 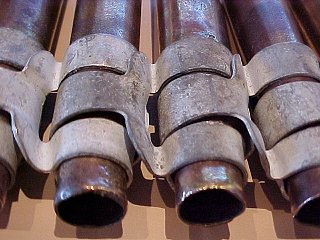 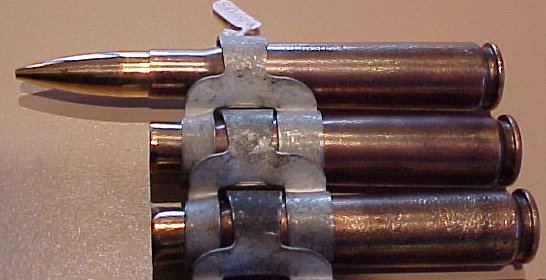 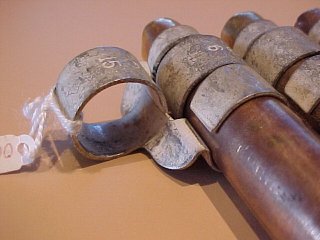 Thanks to Dad and Len Polkinghorn from Ringwood RSL for a lend of this string of empty 50 cal casings but showing the form of the (Australian) disintegrating links, there are two different makes on this string but very similar, One of these types has an " I " in a circle and a varying number that probably indicates the tool used for manufacture so I am thinking that these were probably made by ICI in Australia for the Australian defence forces.

These links are made from 40 thou (1mm) thick Zinc plated steel. How did they "disintegrate", I couldn't bend them and there don't seem to be any deliberate break points! My only thoughts here are that maybe the gun forces the shell backwards on the load cycle and pushes or pulls the shell backwards out of the link and then the left hand link in the photo above would be free to be spat or fall out from the gun on the opposite side. If this is the case then the chain of links would "break" or "disintegrate" but the actual links themselves would remain intact.

So, Ok having researched all this we need to make a scale model and also some 1/20th scale shells:

How small is this? 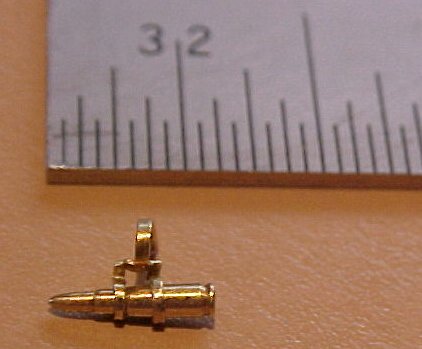 Smaller than a grain of rice - here it is with big Mama.

(this picture also shows the soft Aluminium full size Link that I made in order to check the link drawing and also because I had to give the string of shells back to the RSL and I wanted an accurate reference copy).

The plan is to get these tiny shells cast, probably in silver, by the jewellery casting trade people (if they can do it). I have made the tail so it can be linked through and folded around the next shell so I should end up with a chain of shells that look very realistic. 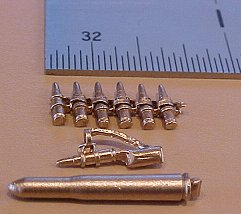 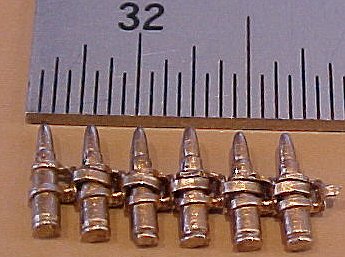 These castings came out quite well, I broke the tail off the right hand one in the string so I put it at the end. These are cast in Silicon Bronze as it's apparently easier than brass to cast good detail and it will discolour the same as the original shells, I had 10 made but only 9 survived. The left hand picture shows the shell straight from the casters and also shows the cast Bofors shell both with the casting sprue's still on the back, I haven't cleaned these up yet. The hole where the tail goes through came out too small and it's a bit tricky to make it bigger but it is do-able. I might have to make it bigger and try again but all in all they work very well, they twist and wiggle just like the real things.

These will be for sale but in the rough cast form, not sure on the price yet until I get some more quantity done.

By my estimation these are the approximate dimensions and the style of the BMG as used on PT Boats in around 1945. 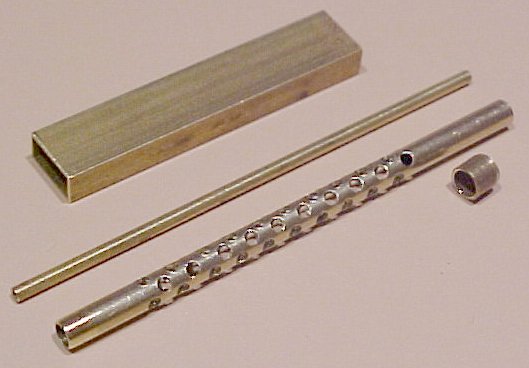 I made a jig out of a 3/8" steel bolt in order to drill the holes in the 1/8" Diameter brass tube to get them in line (actually I made two jigs but the first one, which was made out of a hexagonal steel pillar, didn't last through the first barrel). There are 6 rows of 10 x 1/16" holes. Without a jig this would be almost impossible to do and there are 4 barrels to make! 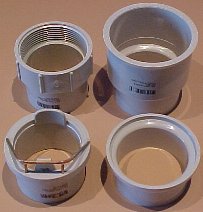 I found a couple of PVC pipe fittings the right size for the turrets where the smaller one is a neat but not tight fit inside the larger one. With a bit of cutting and sanding these ended up being almost exactly the right size for the tops of the turrets and with a couple of bits of left over PVC to make the front gun mount and the back rest, a bit of brass pipe added (the front vertical pieces are drilled into the PVC) the inside rotates easily within the outside. 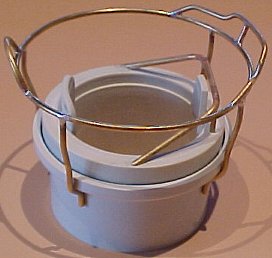 Add some depression rails and voila. 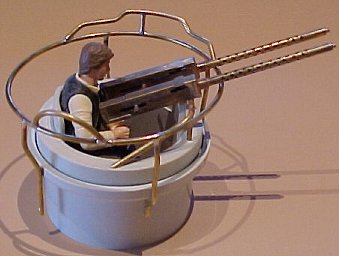 These first guns are just too big, Doh!

Any helpful information or photo's of the real weapon would be most welcome!

I also have a training video on a late model 50 Cal BMG being fired which I will endeavor to get a small extract and put it on this site complete with sound. We now have a Hauppauge video capture card for this project!

The new drawing - partly from a drawing sent to me by Pat Matthews
of the non aircraft style of BMG and then redrawn with the correct barrel for an aircraft style BMG. This drawing matches the Ramo specs for overall length of an aircraft BMG.( Pat's website: https://matthewsmodelmarine.wordpress.com/ - go have a look at Pat's fabulously detailed PT Boat Model and his fine collection of PT Ads from WWII magazines)

With the arrival of my new Clisby (www.clisby.com.au) modelling lathe and the completion of the ultimate PT type BMG drawing (above) I was inspired to start work on the new 1/20th scale model. My intention is to make one only, as exact as possible, and get more cast in bronze or brass, so I have gone a little overboard, as usual, making handles and the "V" trigger etc. Perfection is a curse!

The basic gun with barrel and handles shown slightly larger than actual size - to be continued!

This is the barrel drilling jig that I made on the new lathe out of a 1-1/2" long x 3/16" (Across the Flats) hexagonal aluminium pillar, I have made a few of these on the drill press and I could never get the accuracy required at this scale so I abandoned the idea for a while. I put the pillar in the lathe's tool post and drilled it with a 0.9mm drill bit mounted in the main chuck so the holes are all perfectly in line and precisely spaced on all 6 sides then I drilled a 2.5mm hole all the way through the middle.

Put the brass outer barrel tube inside, jammed securely with a tiny piece of thin paper, and drill all 57 holes through one side of the tube only in the drill press.

Take a look at these full size guns found by Steve Sigmon and his group of volunteer museum people who are restoring a WWII General Motors TBM Avenger aircraft and were looking for drawings to build the BMG's (see:  https://flyingleathernecks.org/project_tag/avenger/ ) and stumbled across www.pt-boat.com just as I was finishing off the ultimate PT aircraft style BMG drawing.

These two guns are believed by Steve and his group to be Hollywood replica's and Steve was kind enough to take about 20 high resolution shots of them for me. He took the drawing and laid it over a photo of one of the guns and voila - perfect fit he say's!

However, I'm not so sure that these are just replica's, if they are they have fantastic detail even including rifling in the barrel's!

Thanks, Steve these are excellent!

One of the original US Patents.