4 boxes required, two on the rear cabin deck next to the engine room hatch and ventilators and two more beside the day cabin on the main boat deck between the torpedo's.

The main box section is made from 1.6mm (1/16") ply butt jointed on the corners. The two boxes which mount on the main deck need to be mounted on "feet" as shown above to allow any water to get out from underneath.

The lid is also made from 1.6mm ply, again just butt jointed and once sanded a "hinge" and a couple of "straps" are made from mylar film (drawing velum or any flexible plastic material) and glued inside the lid and the hinge is glued down the back of the box. 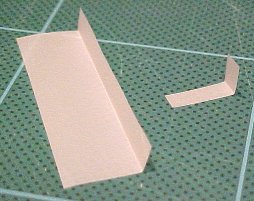 Paint the ammo boxes fully (except the under side edge or the feet on the deck ones) including the camouflage colours before gluing them on. Note the box above doesn't need a bottom as it glues directly on the raised rear cabin deck (x2).

Here I've masked off the area where 2 of the Ammo boxes go on each side of the rear cabin section deck so that the raised deck section between the engine room hatch and the ammo boxes can be painted before gluing the ammo boxes in place because you won't be able to paint it properly once the ammo boxes are glued in place.