Many people around the world are building or have built Hull-1 and Hull-2 and are also now building the Schnellboot, so I thought I would share with you some of their photo's.

Greg Hoffman has almost finished his boat and has sent me a video of it performing, you have to bear in mind that this boat is almost 6 feet long

Greg has tested the Llurssen Effect and says it actually seems to work on the model.

Greg Hoffman in Ohio, USA is building the 1/20th scale Schnellboot and is more progressed than I am actually, he is also the first to buy a set of rudders cast rudders and struts for it.

Greg has built his own armoured Kallotte bridge and torpedo tubes - It's looking great Greg.

Hello John,
As you can see from the attached photos I have made good progress on your superb model.
I highly recommend, purchasing your struts and rudders.  The rudders went in place with no problems.  The struts, for me because I got ahead of myself and had already installed my shaft housings, had a bit of fitting involved. Had I removed the shaft housings, and started over, the struts would have gone straight in.
I have three dynamite brushless motors (DYNM 3900) and three 60 amp esc's.
I decided to simplify the linkages on the rudders. One servo controls the main rudder, and one servo controls the wing rudders.  Neutral on this servo aligns the rudders straight.  Position one moves the wing rudders outward to 30 degrees, and position two creates the Lurssen effect by moving them inwards to apx 17 degrees.
My efforts are concentrated on the bow section currently part of it is lightly primed light grey.  I discovered a baked bean can is approximately the correct size for the gun tub.  The depression rail is fabricated from soldered brass tubing, as is the mount and the forward gun.  The gun will eventually rotate, that system is under creation.
Torpedo tube doors are individually controlled by separate servos, and a pneumatic system is planned for torpedo discharge.
Again thank you for creating this superb kit.  I will keep you updated.
Greg

Now that's the business end complete with my new struts and rudders.

Greg used part of a baked bean tin for the gun tub.

Water cooled brushless motors and you'll notice Greg has epoxied the inside of the boat (and the outside).

Greg has come up with a simple way to operate the wing rudders to test the Llurssen effect using only one servo.

Robert is the first to build the new superstructure kit and with very limited information from me as he was so keen to get it done. I haven't finished mine yet!

The guns were purchased elsewhere.

Robert wants me to tell you that the torpedo's are a work in process.

Hi John, Once again, I am absolutely amazed at the levels of precision and painstaking detail evident in your kits. I have been dry-fitting parts for the forward cabin and I am having a great time trying to figure out not only how it all goes together, but the sequence in which it must be assembled. It's quite a challenge. Once again it has been confirmed to me that if any part does't fit exactly, then I most likely have made a mistake. 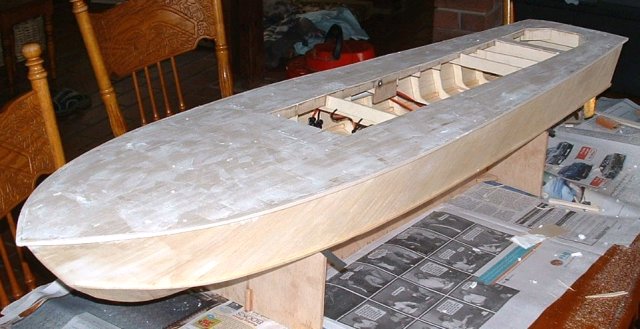 Just thought I would send you some photos of the progress on the boat.
This is built from the plans on your website.

I have just finished  planking the deck ( approx 140 planks 200mm x 10mm, cut by hand ) and have filled the joints ready for the final sanding and then three layers of dope to waterproof.
In the one photo you can just see the brass props (35mm dia, hand made in South Africa).
I have test run the boat with the two outer motors only powered up and it took of like a rocket. I am doing a run with all three motors this weekend and will send you a photo of the boat at full speed, if all goes well (fingers crossed).

Hull is two layers of 1,5mm balsa . The first layer is large pieces and the second cut planking.
On the deck I first put a layer of 1mm ply down and then covered with the planks cut from 1,5mm balsa. All glued with superglue.
I did not make the props myself they are made by a guy in Johannesburg and cost me R70 each. 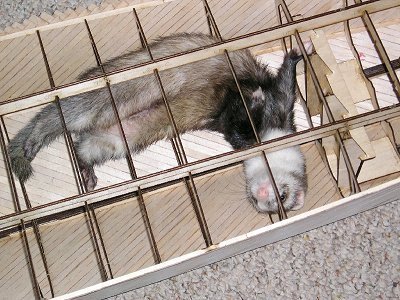 Bob is in the US and for covering he bought 0.8mm Finnish Birch Ply from "Aircraft Spruce and Specialties" and used a standard Balsa splitter with a #11 Exacto Blade to make the strips, he glued it with medium CA and also used an old mono-kote hot iron on medium heat to iron the ply into shape which he said relaxes the wood and allows it to fit easier and keeps much of the glue off your fingers. 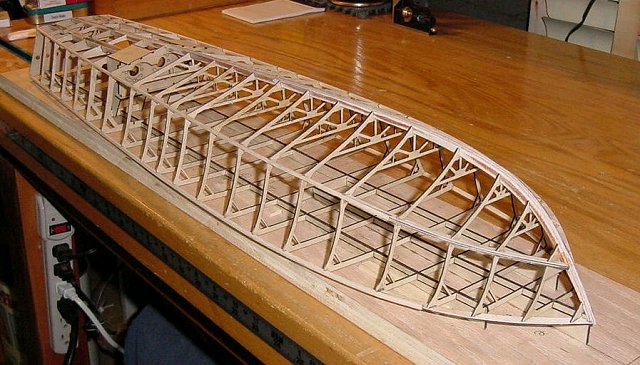 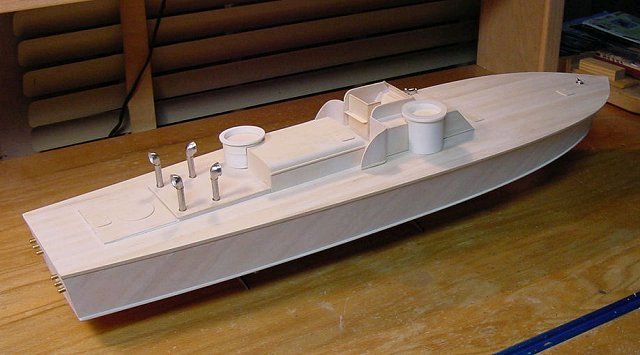 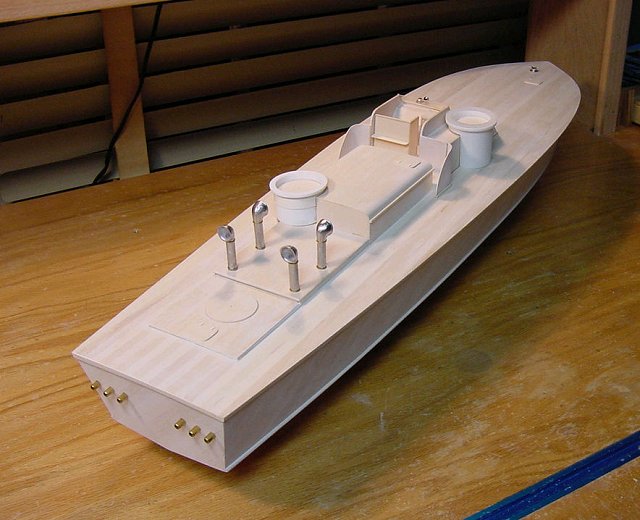 An email from Bill:

First off, I don't want to embarrass you with praise, but its important to give credit when credit is due. I am amazed at how quick the hull went together. It arrived in last Mondays mail and I have spent an hour or two after work every night piecing it together. The attached photo is after a few finishing touches Saturday. Normally it would take months to get to this stage of a project, where it took me, at a slow pace of 8 to 10 hours, to get to this point. I began to appreciate how much time you spent at the drawing board as the model progressed. Layout, spacing and fit were perfect. The little notch at the stem of the keel (where it fits into the bow runner) is simply genius. The only time consuming aspects were (1.) laying out the runners on the board. If these are off, the whole project will suffer, and (2.) fairing the keel to match the frames at their respective stations. You had enough vision the allow for both procedures. The little square, designed to simplify spacing of the runners, and striking off lines on the keel to help fair it to the hull frames. You cant get any closer to the actual building process of a real Elco PT-103 series than this. It's almost a shame to cover it, as the framing is a work of art in itself. I can't believe how strong the frame is at this point. Double planking the frame will make it almost indestructible. A reply is not necessary, but I wanted to let you know how pleased I am with the product. - Best Regards, Bill Head, Weymouth, Ma. USA

Also from Bill:  I have been experimenting with the machine gun turrets, and I think I am almost there. I found some 1.5" OD PVC adapters at the local hardware. Scaled to actual size, this would be about 52 1/2" OD. Looking at plans from PT Boat.org, the inside turret dimension was 46" (drawn as 23" radius). Adding an inch or so of wall thickness, this would bring the scale pretty close. At 1/35 scale, it would be pretty hard to hand make the "Ma Deuces", so I will probably purchase a few of the several that are available in either plastic or resin. The torpedoes and Oerlikon 20 mm gun is another issue.

J.D. I have some commercial 1/35th plastic molded 50 cal BMG's also, that's why I did the 1/35th version as there is a lot of stuff already available.

Alan Zulberti is building a 1/20th Hull-2 model and found these fantastic 1/20th parts from Russia, the bofors sells for about Euro180

Also from Alan:- I timed the speed of the torpedo this afternoon, and it covered 40 feet > in six seconds. If the math is correct on my Italian calculator, that's a > 1/16^th scale speed of 63 knots. I still have to get the CG a little > farther forward and decrease the weight of the torpedo slightly, but > otherwise this looks like it will work.- Alan

I have done the first layer of planking and am extremely impressed by your design. I will send pictures along as we progress through the assembly process. This is the best kit that I have ever assembled having nearly 50 under my belt, but I am overwhelmed by how accurate your skeleton is (Hull-2). If you ever need any references tell them to email me. WOW - John Kotlanger  jkotlanger@aol.com .