I have added lots of bits and pieces such as the dinghy, radar mast (most of), BMG turrets, steering wheel, ammo lockers, mooring bits, gun mounts etc.

I need to build one and document it and how it all fits together. I have added it to the price list already as I have a few customers who will take it untried and if you want to purchase a kit I will replace any parts that don't work out properly for free.

Below is the 40mm Bofors cannon ammo storage rack, this sits on the rear of the engine room deck. This is in its raw form without any sanding.

Below is the steering wheel, this came out better than expected considering its small size.

Below is the 50 cal BMG turret hand rail, this also came out better than expected

Below is one of the deck mooring bits, its made of two 1mm thicknesses glued together and fitted into the round base, needs a bit of sanding but looks pretty good.

Below is the bow mooring bit, this is made of 4 or 5 oval hollow pieces fitted into a base piece, this will sit on the very front of the deck.

Below is the radar control box, this sits vertically on the outside forward wall of the day room just behind the wheel house. Most larger pieces are engraved on the inside face and again everything needs to be sanded before finishing.

Hull-2 Laser Cut Superstructure (where I left off in 2007)

It's taken a while but I have finally got around to doing a laser cut version of the Hull-2 Superstructure, this is the first cut that I did as a test, so nowhere near finished but I needed to check some idea's such as how strong the day room roof trusses would be and making the side join jigsaw joints a tight fit etc. 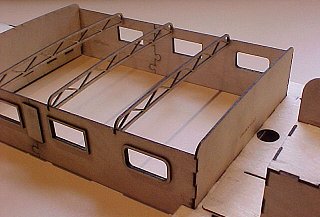 The roof trusses look cool and they are pretty strong as well, I have changed them since though as I decided to inset a sheet of 1.2mm ply to most of the roof and then use something thinner (not decided yet) over the top to make the curved sides and this then gives me the ability to make holes to suit masts, hand rails and put hatches in the right place. 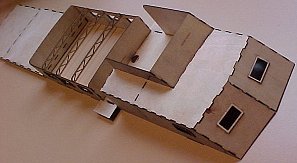 Getting the front roof curve and fit to other faces is a bit of a trick but it looks pretty good so far. I may make the bridge as a separate drop in inner so that it can be detailed separately. There are no machine gun turrets yet. 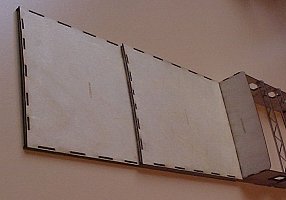 The engine room hatch and the rear bofors mount are all in one piece but they can be changed to suit a PT109 style layout as well.

Below are some original photo's that I found (2018) related to the superstructure.

The Magnetic Compass and Binnacles.

The aluminum windows in the Dayroom and Radio Room.

The Port and Starboard Running Lights.