A warships Banner or Naval Standard (flag) is called an Ensign. The US Naval Ensign is identical in appearance to the US National Flag (stars and stripes) (but may vary in proportions)...

The position of honor on a ship is the quarterdeck at the stern of the ship, and thus ensigns are traditionally flown either from an ensign staff at the ship's stern, or from a gaff rigged over the stern. More recently, when a ship is at sea, the ensign is often moved to the starboard yardarm. The traditional rule that no flag should be flown higher than the national flag does not apparently apply on board a ship: a flag flown at the stern is always in a superior position to a flag flown elsewhere on the ship, even if the latter is higher up.

Jacks are additional national flags flown by warships at the head of the ship. These are usually flown only when not underway and when the ship is dressed on special occasions. The US naval Jack during WW2 was the same as the US national flag's Canton. The Canton is essentially a flag within a flag in the upper corner next to the flag pole. The US Canton is the same as the blue field of the national flag with white stars. The term Jack possibly dates from Queen Anne's time (reigned 1702-14), but its origin is uncertain. It may come from the 'jack-et' of the English or Scottish soldiers; or from the name of James I who originated the first British union in 1603, in either its Latin or French form Jacobus or Jacques; or, as 'jack' once meant small, the name may be derived from a British royal proclamation issued by Charles II that the Union Flag should be flown only by ships of the Royal Navy as a jack, hence the Union Jack, as a small flag at the bowsprit.

The modelling issue here is that the American Flag during the second world war had only 48 Stars (48 states) instead of the current 50, so scale flags are generally available but mostly not correct for our purposes, so we had to design one. The information regarding the flags current design is readily available except for the precise layout of the stars at the time so we had to guess a bit here, also from available photo's of PT boats in action with flags flying it seems that the scale of the stars is larger than that specified by about 20%.

If you click on the image above you will download a much larger (flag.gif) version which is 3227 x 824 pixels and is about 33Kbytes this can be scaled to suit and printed on a colour printer.

"Standard Color Cards of America" (maintained by the Color Association of the United States, Inc.)

For Pantone colors the red is generally considered the same as Pantone 193, and the blue as Pantone 281. 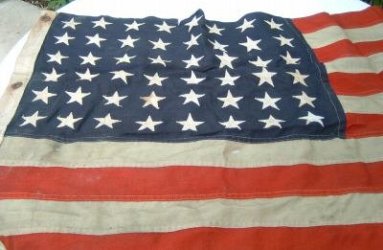 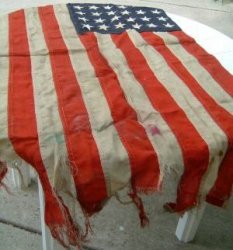 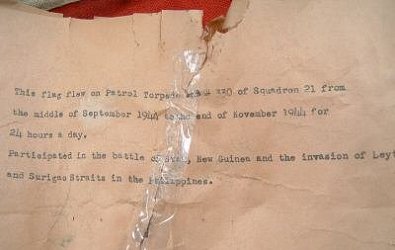 This flag flew on Patrol Torpedo Boat #330 of Squadron 21 from the middle of September 1944 to the end of November 1944 for 24 hours a day.  Participated in the battle of Biak, New Guinea and the invasion of Leyte Gulf and Surigao Straits in the Philippines.  There is also a typed notation on the back of the photo:  Crew of P.T. Boat No. 330 Leyte, P.I.  Compliments of Oscar R. Fields, Q.M. l/C.  The flag has 48 stars and measures about 27 x 52 or 53 inches long.  The end is badly tattered so it is difficult to measure accurately. 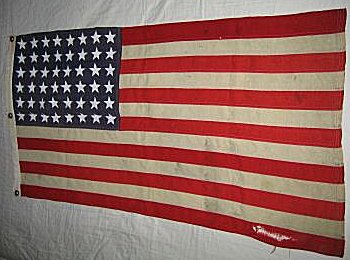 A comment on the US flag sent to me from Brian Farmer in Ohio:

I did want to comment on an error that was immediately apparent on your site.  The flag you have displayed should NEVER be displayed on a gun boat, nor for any military purpose.  The flag you displayed is a US Code Title 4 flag, which has a hoist to fly ratio of 1 to 1.9.  That flag is the National Flag of PEACE.  A flag in any other proportion is a War Flag.  Offhand, I can't provide you any links for the different size standards used by various military departments.  My flag interest is primarily in the Civil Flag, which is used to denote a non-military or civilian establishment.

An executive order issued by President William Howard Taft on October 29, 1912, fixed the overall width and length of the U.S. flag, known technically as the hoist and fly, respectively, in a ratio of 1: 1.9. The thirteen stripes were fixed at equal width. The hoist of the blue field containing
the stars was fixed at seven-thirteenths of the overall hoist, that is, as extending from the top of the flag to the bottom of the seventh stripe. The
fly of the blue field was fixed at a tiny fraction over three-fourths the overall hoist. The diameter of each star was established as a minute
fraction under one-sixteenth of the overall hoist. http://www.wealth4freedom.com/truth/flag.htm

The Civil Flag is sort of an inverse design of the Peace Flag.  Here is a blueprint of the current Civil Flag specifications.

Thank's Brian, your information is much appreciated and I don't want to seem disrespectful, but I just can't see an American flag with vertical stripes becoming all that popular!

Although most Americans think of the Stars and Stripes as their only flag, it is actually for military affairs only. The other one, meant by its makers for wider use (peacetime), has vertical stripes with blue stars on a white field. You can see this design, which bears civil jurisdiction, in the U.S. Coast Guard and Customs flags, but their service insignias replace the fifty stars. -  from:  www.wealth4freedom.com/truth/civil_flag.htm

Wow, there seems to be an enormous amount of contention and even conspiracy theories regarding the "correct" US flag and what it stands for but for PT-Boat modelling purposes and from the actual PT-Boat flag stories detailed above it becomes clear that, at speed, a PT-Boat's flag would not have lasted all that long, so new flags would have needed to be "acquired" for patriotic display purposes on a regular basis and my (maybe naive) thinking is that as long as a flag or ensign had the right number (48) of stars and stripes (13), and looked right, it would not have mattered much to the boat's crew, the size, type or hoist to fly ratio!

Here is a good specification for the British Flag or Union Jack and how to draw it correctly: http://www.jdawiseman.com/papers/union-jack/union-jack.html

And how to fly it correctly: http://www.royal.gov.uk/output/page398.asp

The Union Flag, or Union Jack, is the national flag of the United Kingdom.

It is so called because it combines the crosses of the three countries united under one Sovereign - the kingdoms of England and Wales, of Scotland and of Ireland (although since 1921 only Northern Ireland has been part of the United Kingdom).

The cross of St George, patron saint of England since the 1270's, is a red cross on a white ground. After James I succeeded to the throne, it was combined with the cross of St Andrew in 1606.

The cross saltire of St Andrew, patron saint of Scotland, is a diagonal white cross on a blue ground.

The cross saltire of St Patrick, patron saint of Ireland, is a diagonal red cross on a white ground.

This was combined with the previous Union Flag of St George and St Andrew, after the Act of Union of Ireland with England (and Wales) and Scotland on 1 January 1801, to create the Union Flag that has been flown ever since.

The Welsh dragon does not appear on the Union Flag. This is because when the first Union Flag was created in 1606, the Principality of Wales by that time was already united with England and was no longer a separate principality.

The Union Flag was originally a Royal flag. When the present design was made official in 1801, it was ordered to be flown on all the King's forts and castles, but not elsewhere.

The German Flag of WW2

Below is a picture of the WW2 German Kriegsmarine Flag as well as a common alternative that is often used to not offend some people.

IF YOU CONTINUE SCROLLING YOU MAY SEE A GERMAN SYMBOL THAT YOU MAY FIND OFFENSIVE.

I AM INTERESTED IN SCALE MODEL BOATS AND I LIKE TO MAKE THINGS AS AUTHENTIC AS POSSIBLE SO I HAVE DRAWN THE FLAG THAT WAS USED ON THE GERMAN SCHNELLBOOTE DURING WW2.

IF YOU ARE OFFENDED BY CERTAIN GERMAN WW2 INSIGNIA PLEASE LEAVE THIS PAGE NOW!!!!!

The bottom flag is a commonly used flag for models and such, that has an Iron Cross in the middle instead of what was actually there, or there are other variations where the middle circle is left just blank white.

Please be considerate in your use of the German flag, I show the actual flag for historical accuracy only.

I can't help history - the flag did exist, denying that it existed or erasing it from history seems to me to hide the truth!

On my model I have painted the middle circle white.

I am originally from Portsmouth, UK, the Germans bombed the hell out of Portsmouth during the war and I lost both grandad's and a few other relatives due to the war but that war finished some 75 years ago!