The crew - obviously having trouble with that torpedo

OK so I made the boat the wrong scale - 1/20 - it's almost impossible to get figures in this scale unless you have an unlimited budget, there are people who will make them up for you and there are some fantastic modellers out there.

So - there are some "Starwars" "Jurassic Park" "Dr Who" and other humanoid figures that are dressed "sort of" appropriately and with a sharp fine saw and some gel superglue (Locktite 406 is better) and a scalpel, some sandpaper and some olive drab paint these could be made to look the part. They are available for just a couple of dollars if you look for them.

There is a very good Han Solo figure with a real cloth jacket that resembles a PT Boat captains jacket and with the top and bottom parts of his legs shortened a little and the removal of some hair, laser weapon, accessories and add a cardboard captains cap he really looks the part. 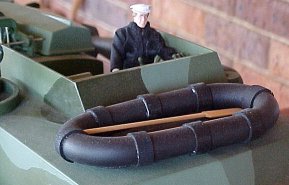 Also with some practice it's not that difficult to modify his legs a bit and make him sit down as a gunner.

I have found that some figures can be cut through the body instead of the legs so that you end up with guy's with different proportions. I seem to have a few in the crew who could be identical twins though so I am thinking different heads!

The gunner needs a cloth cap or helmet. ( this cap is the captains )

I bought another Han Solo with a molded jacket only to find that the jacket arms didn't come off so I cut a lot of it away with a scalpel and turned them around into firing position, I had to remove a fair bit of the body at the front to get the hands close together. The body and legs have been shortened and the legs cut back at an angle just below the knees to make the legs in the right angle sit down position. I also used some Araldite to fill in the bendable bum. The boots may have to go, maybe carve them down into trousers!   He also needed a haircut, still a bit too much hair but PT crews were rebels!

I have drawn up the cap cutouts in Autocad and converted to a .gif file below, print it out onto thin card at the right scale and cutout, I glued it with some gel superglue, fiddly little sod of a thing, had to unglue my fingers again!

I used my thumbnail to make dents in the top and give it some crumple and shape like a real one, it needs a bit of a dent upwards where it sits on the top of the head.

Cut out the "band" and use it to measure around the head before gluing the tab and making it into a circle. The front of the band is the high bit and the tab is at the back.

The "peak" is a larger diameter on the inside curve than the band will be because it is meant to be curved and sloping downward at the front like a visor.

It needs a badge at the front of the band between the top and the peak and some braid around the edge of the peak I just ran some gel superglue around the peak and a blob for the badge and I'll see what it looks like with some gold paint over a white background.

Some hats were black and some where white, anybody know why? the Captain seems to have white!